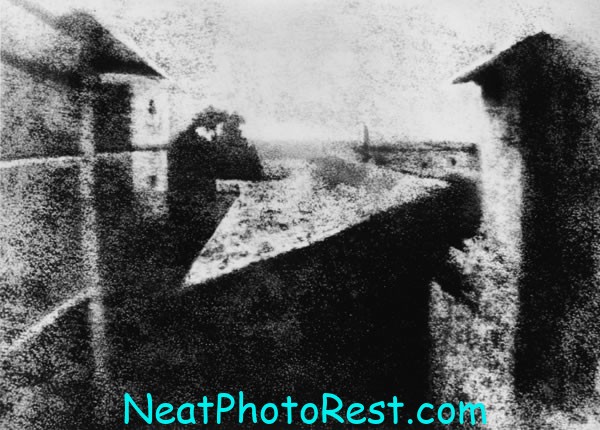 In 1826, Joseph Nic?phore Ni?pce took the World’s first photograph using a camera obscura. This momentous event would lay the foundations for photographic technology as we know it today.
It took Ni?pce eight years to perfect his photography process, which he eventually named ?heliography?. This involved coating a pewter plate with a light-sensitive substance called bitumen of Judea. The plate was then exposed to sunlight through a camera obscura for several hours. Finally, the plate was washed with a solvent, revealing the latent image.
Sadly, Ni?pce died in 1833 before he could see the full potential of his invention. However, his partnership with Louis Daguerre would lead to the development of the daguerreotype, the first commercially viable form of photography.
The daguerreotype was a big step forward for photography. It did away with the need for a camera obscura and allowed for much shorter exposure times. This made it possible to capture moving subjects, albeit with a certain amount of blur.
The daguerreotype quickly became popular, with studios springing up all over Europe and America. People would flock to have their portraits taken, resulting in some stunning examples of this early form of photography.
Despite its popularity, the daguerreotype had some major drawbacks. Firstly, each plate could only be used once, meaning that copies were impossible to produce. Secondly, the image was often marred by ?lens flare?, caused by light reflecting off the surface of the metal plate.
It was these drawbacks that led to the development of the next big advance in photography ? the negative/positive process. This was pioneered by William Henry Fox Talbot in England. His ?calotype? process involved taking a negative image on paper, which could then be used to produce any number of positive prints.
The negative/positive process quickly became the standard for photography and remains so to this day. It opened up a whole new world of possibilities, making it possible to mass-produce prints and create detailed enlargements.
Talbot?s process was later improved upon by Frederick Scott Archer, who developed the wet plate collodion process. This involved coating a glass plate with a light-sensitive solution and then exposing it to light. The resulting negative was then developed and fixed, before being transferred to a positive paper print.
The wet plate collodion process was used throughout the rest of the 19th century and into the early 20th century. It produced some stunning results, with many photographers pushing the boundaries of what was possible.
Today, photography is more popular than ever. Thanks to the advent of digital technology, anyone can now take and share photos with ease. Who knows what the future holds for this amazing art form?